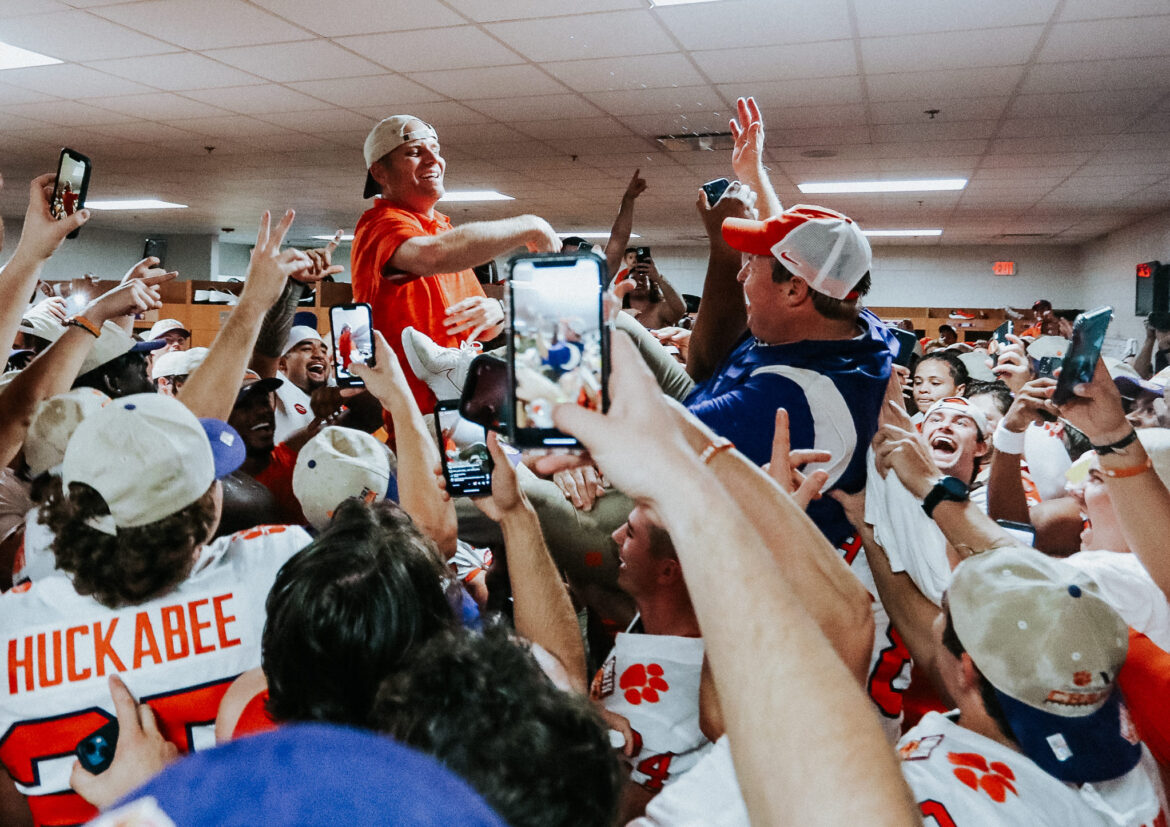 The dust has settled on another year of college football.

As we enter the lull of the dreaded offseason, we look back on the 2021 season for Clemson. The Tigers failed to win the ACC and make the College Football Playoff for the first time since 2014, but finished strong and managed to get to 10 wins.

With the highest of expectations for this team, all eyes started and stayed on sophomore quarterback DJ Uiagalelei. Seen as an early Heisman Trophy favorite, the entire college football landscape had expected Clemson to make a seventh straight College Football Playoff. Unfortunately for the Tigers, that expectation was too high.

Starting off the season with a Goliath vs. Goliath matchup in Charlotte, the Tigers looked to start their season with a resume-making win over the fifth-ranked Georgia Bulldogs. In what was anticipated to be an exciting game in the eyes of many, it underperformed.

Filled with offensive miscues and conservative play-calling, the Tigers and Bulldogs had very little to separate themselves. Georgia claimed the victory with a 74-yard interception return for a touchdown by Christopher Smith late in the first half. That was all that separated the two sides as the Bulldogs won 10-3.

In the previous game vs. Ohio State in the Sugar Bowl, the Buckeyes put Clemson’s front through the ringer in their blowout win over the Tigers. It was made apparent that Clemson’s front had not seen much, if any, improvement during the offseason.

The offensive struggles seen in Charlotte would plague the Tigers for the entirety of the 2021 season. Georgia Tech, a team still in an offensive rebuild, outgained Clemson at Death Valley in the ACC opener on Sept. 18. One week later, NC State nearly doubled Clemson’s total offensive output en route to a 27-21 overtime victory over the then ninth-ranked Tigers.

Following another tough contest where the Tigers needed a last-minute stop at Syracuse, Clemson faced its toughest opponent yet. Plagued by offensive incompetency and injuries to their biggest names, the Tigers travelled to Pittsburgh.

Where Clemson had fallen off the map, Pitt had catapulted itself to the top. With a lights-out offense and strong defense, the Panthers would prove to be a test too tough.

In a fashion all too familiar, the offense had underperformed, pushing the defense to a breaking point. It had gotten so dismal on the Clemson sideline that a change had to be made. Uiagalelei, the preseason Heisman candidate was benched. Taisun Phommachanh entered the game and instantly got the ball moving.

Clemson quickly marched down the field and into field goal range, leading to a much-needed three points for The Tigers. However, in a season that had yet to relent, another name joined the Clemson injury report. Phommachanh left the Pitt game after picking up a knock to his non-throwing shoulder, thus thrusting Uiagalelei back into action.

With no scholarship quarterbacks to back up the position for a few weeks, the name atop the depth chart was clear. Uiagalelei was Clemson’s starter for the remainder of 2021.

After the loss in Pittsburgh, Clemson had found itself at 4-3. For first time in over a decade, head coach Dabo Swinney’s team was only one game above .500 through seven games. At this point some considered Clemson’s season to be lost. With no one to turn to, it was clear: the Tigers needed an Alpha.

Along with replacing All-American quarterback Trevor Lawrence, Clemson had to fill the shoes of the ACC’s all-time scoring leader in Travis Etienne. Prior to the season, many anticipated senior running back Lyn-J Dixon to fill that slot; new Clemson running backs coach CJ Spiller went another route.

True freshman Will Shipley was tasked with filling the shoes of Etienne. Similar to Etienne, Shipley made his name by setting and breaking records at a unprecedented pace. It all began with a career-building performance vs. Florida State on Oct. 30.

With 152 total yards and two touchdowns, including the game-winner, Shipley proved to be the difference in the Tigers’ 30-20 victory over the Seminoles. But it was not until after the game where things would change.

With name, image, and likeness affording student-athletes the ability to profit during their careers, it was only natural for Shipley to want a piece of that pie. At midnight following the win over FSU, Swinney texted his running back a NIL idea, “Ship Happens”.

A pun based off the profound statement, a catch phrase was born. Quickly, Clemson fans took to social media with the new slogan. Shipley quickly signed a deal with the Clemson-based company ‘Tiger Town Graphics’ to license the term.

With a new star being born in the backfield, it would not long before a new leader was born.

A Leader is Forged

In the midst of one of the worst offensive seasons in recent Clemson football history, it is natural for all eyes and most criticism to fall on the quarterback. With a negative touchdown-to-interception ratio, it was easy to place a large amount of blame on Uiagalelei.

It was easy to forget the fact that Clemson’s line had a poor season or that positional captain Matt Bockhorst suffered a season-ending injury. Also easy to forget was how Clemson’s top four wide receivers had played in a combined four games at one point. Instead, the blame fell on the signal caller.

Yet, in the face of all this criticism and attacks, a stonewalled Uiagalelei met with the media every week. He stood up for his team and teammates; he never faulted others and instead took the onslaught alone. Uiagalelei understood that bearing the burden would allow his teammates to focus on their craft without being under the microscope.

In the face of trials and the overwhelming heat of the hot seat, Uiagalelei stood unbowed; he stood as a leader. Uiagalelei may not have been enjoying the quality of season many had expected from the former No. 1 recruit, but he grew and morphed into something better.

For a program built to feed the hearts and minds of its athletes, Uiagalelei’s heart and mind grew tenfold. In the midst of a season that was all but lost, it was clear that the Tigers were not going to give up — not if their quarterback had anything to say about it.

An Offense Comes to Life

In a turn that Clemson fans had prayed for, the offense came to life. Clemson closed the regular season with its three best offensive performances.

Lead by a dynamic trio in the backfield and coupled by improved play from the young perimeter, Clemson would trounce No. 10 Wake Forest 48-21 on Senior Night on Nov. 20. Led by a ground-and-pound attack, totaling 333 rushing yards, the Tigers scared off the ACC Atlantic champion and handed the Demon Deacons their first ACC loss. Following their emphatic win over Wake, the Tigers would face a long missed opponent.

Due to the COVID-19 pandemic, Clemson was not able to play hated rival South Carolina in 2020. What was once the longest lasting rivalry in the NCAA quickly became a much missed commodity.

In a fashion many hoped for, the Tigers beat the turkey legs off the Gamecocks. With 265 yards rushing and a tenacious defense, Clemson scored the rivalry’s first shutout since 1989 with a 30-0 thrashing in Columbia.

In a regular season filled with trials and tribulations, Clemson found itself on the door step of familiar territory. An ACC crown and College Football Playoff appearance were out of the question, but on the back of a five-game winning streak, the Tigers had put themselves in a position to continue another streak.

At 10 years running, Clemson had enjoyed the third longest streak of recording at least 10 wins in NCAA history. Now at 9-3, they had the opportunity to continue it.

After an abysmal start to the season, Clemson quickly found a groove and ended the regular season as one of the nation’s hottest teams. An unfamiliar foe was all that stood between the Tigers and a continuation of the streak.

For the first time in program history, Clemson would face Iowa State. In the preseason, both teams were ranked in the top seven. Yet, after a disappointing season by both of their standards, they found themselves matched up in Orlando for the much acclaimed Cheez-It Bowl.

Both teams boasted top-10 defenses and both teams found themselves in situations where they had to replace workhorses. Clemson had spent the season trying to replace Etienne’s production. Iowa State’s Breece Hall opted out of the bowl game.

In the weeks following its thumping of South Carolina, Clemson saw a mass exodus among the coaching staff. A staff that seen unprecedented continuity finally had an overhaul.

Frank Broyles Award winners Brent Venables and Tony Elliot accepted the opportunity to be their own leading men. Venables is now leading his former home in Norman as the new Oklahoma head coach. Elliot stayed in the ACC to lead Virginia.

Replacing the two was a task that Swinney had anticipated and his decision was an easy one.

“It took all of 30 seconds for me to make,” Swinney said of his decision to appoint Wesley Goodwin and Mickey Conn to co-defensive coordinators while also promoting quarterbacks coach Brandon Streeter to replace Elliot. These hires would receive a significant amount of backlash from the Clemson faithful but it was not long for those worries to be washed away.

In an exhilarating game in Orlando, the Tigers would top Iowa State, 20-13. Goodwin quickly drew praise as his defense held the Cyclones to just 13 points and only 270 total yards. This was an Iowa State team that had averaged more than 35 points and over 450 total yards per game.

On the other end, Clemson saw an offense with a new will. Sustained drives and creative play-calling were keys to the bowl win. Statistics may show one story as on paper, but Clemson’s offense moved the ball. Turnovers and drive-killing penalties kept the Tigers from running away with the contest.

Entering the season, an ACC championship and playoff appearance were the expectations. A 10-3 season by Clemson’s standards is a disappointment. But in the face of all the adversity, the Tigers finished strong.

In total, Clemson was down 30 scholarship players by the end of the season. Four team captains ended their careers on the sidelines. Walk-ons were thrusted into starting and significant roles early in the season. By season’s end, four assistant coaches would have to be replaced.

All in all, Clemson had faced the perfect storm — a storm that would have sank many other ships. But Clemson treks on. It does so now with an 11th straight 10-win season under her belt.

Clemson finished the 2021 season ranked 14th in the AP Poll. The 6-game winning streak is also the longest active streak among Power 5 schools.

The Tigers also currently own the second-highest rated recruiting class in the ACC.

Born and raised in a Clemson household Aaron brings an in-depth understanding of all things Tiger and college sports related. With over 6 years experience Aaron has numerous publications spanning several platforms. From local newspapers to nationally printed magazines Aaron's name has become synonymous with reliable and informative content.

Ranking All 39 Bowls from 2021 By Excitement

Will FSU Capitalize on Recruiting Momentum?