The Biggest Snubs of the NAIA Playoffs 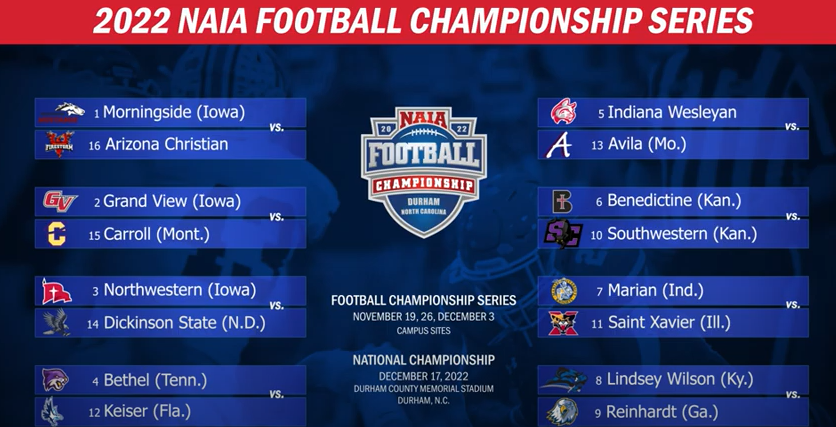 Last night there were 16 teams that heard their name for the NAIA Playoffs. Out of the sixteen teams, twelve of these teams were conference champions. The other four teams were considered the best non champions, and received their bids. Watching last night were a few teams that thought they were absolutely snubbed of the NAIA Playoffs. Some thought they did plenty to receive a bid, and even sparking conversations that reformation needs to take place. I would love to see what majority of your opinions are once you see the teams below. Disclaimer: I am writing this presenting the perspective of these teams, I have no bias.

The Threshers of Bethel almost had a perfect season with only one loss on their record. They ended up in a three way tie for the KCAC Crown, but were the odd team out for the playoffs. Their counterparts Avila and Southwestern ended up going. Avila won the KCAC tiebreaker to enter the playoffs due to point differential between the three. Avila was also the team that gave Bethel their sole loss.

Many Bethel fans thought their head to head win against Southwestern would give them the at large bid. That did not happen despite beating Southwestern 31-23. Bethel has lost two NAIA games in two seasons, both times missing the playoffs by narrow margin. The past two seasons Southwestern has two losses to Bethel, and also two NAIA Playoff bids.

The Bobcats are a very young program and were hoping to hear their name Sunday night. Instead they heard a team that narrowly edged them in the regular season, and another team they beat by 21 points. The Bobcats also took D1 Butler to the limit, taking a very close one possession loss. The Tweet below is from St. Thomas president David Armstrong, and his thoughts.

And yes, the best way in is to win @SunConference ,failed to do that,it’s on us. But we believe our resume puts us in as at-large. Congrats to @KeiserU & @SXUFootball (also for scheduling us) wish them & all teams good luck. All r invited to Miami anytime & at your place! @NAIA https://t.co/UDhyfiaWoV

The Sooner Athletic Conference saw something similar to the KCAC ending in a three way tie. Arizona Christian won the tiebreaker between them and Ottawa to send themselves to the NAIA Playoffs. As you can see in the tweet below this is how the Sooner determined Arizona Christian as the team to go.

Here is what we were told about the Sooner Athletic Conference Tie Breaker.

– If multiple teams finished inside the Coaches Poll Top 20 the winner of the Head to Head Matchup made it. Source @CSN_NAIA

Other Teams that were in contention for At Large Bids