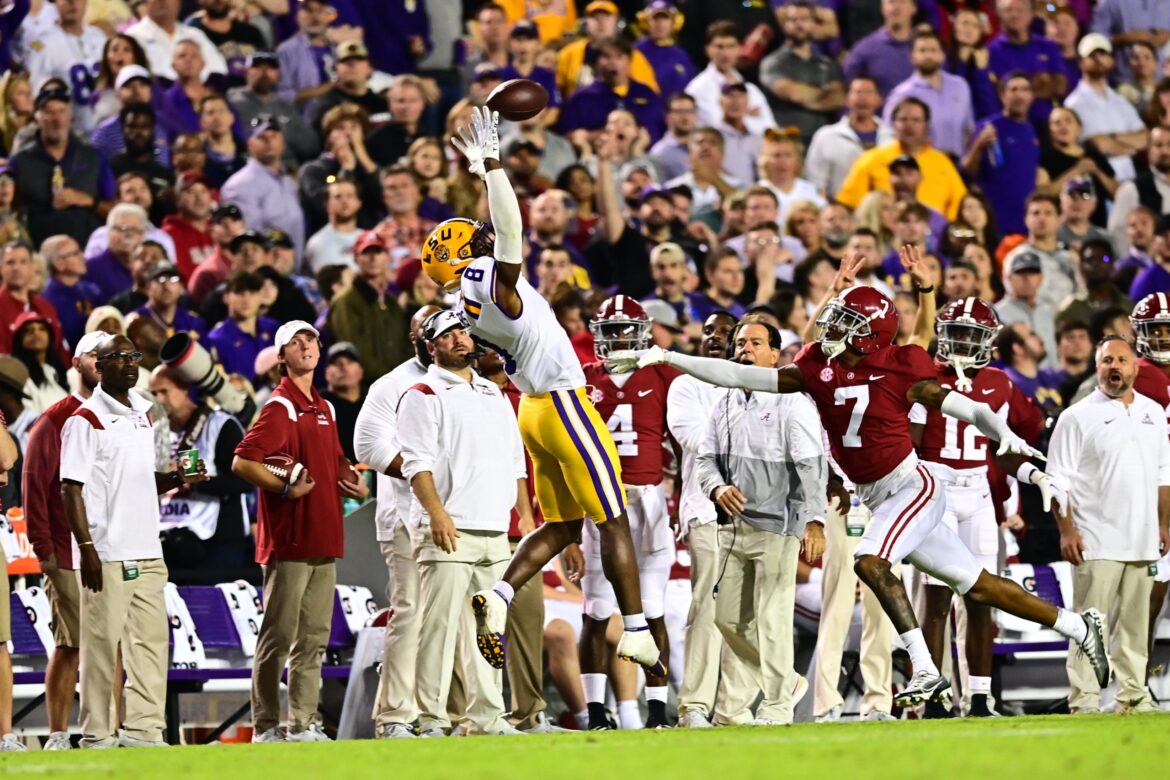 Notre Dame and Georgia were both impressive in their dismantling of top-5 opponents this week. Our Team of the Week, however, resides in Baton Rouge.

Thanks to a 2-point conversion in overtime, following Jayden Daniels’ touchdown run, No. 10 LSU took down sixth-ranked Alabama on Saturday, 32-31. The win is the first for the Tigers in the series since 2019 and first at Tiger Stadium in more than a decade.

Nearly a 2-touchdown underdog, LSU has earned the Week 10 distinction as Fifth Quarter/CFBHome Team of the Week:

Following Daniels’ 25-yard scamper on the first play of LSU’s overtime possession, head coach Brian Kelly had a decision to make. With the score 31-30, Kelly kept his offense on the field to go for the 2-point try and the win. On the try, Daniels hit Mason Taylor in the corner of the end zone for the winning score.

For Kelly, the decision may have been a case of lessons learned.

In his LSU debut, the Tigers scored on the final play of regulation against Florida State to cut a 7-point deficit to one. In that case, Kelly elected to kick the tying extra point and play for overtime, but it was blocked by the Seminoles.

Saturday’s contest included nine lead changes and no ties after it was 0-0. Daniels accounted for three total touchdowns and led LSU with 95 yards rushing.

Alabama’s Bryce Young completed less than half of his passes, but finished with 328 yards passing, a touchdown and an interception. Roydell Williams rushed for two touchdowns for Alabama.

Prior to the winning 2-point play, Daniels and Taylor hooked up to give LSU a 24-21 lead with 1:47 left, but Alabama was able to march into field goal range. With 21 seconds left, Will Reichard connected on a 46-yard field goal to force overtime.

Williams scored the final Alabama touchdown of the night to give the Crimson Tide a 31-24 lead in overtime. The next two plays resulted in LSU finding the end zone.

Alabama finished with 465 yards to 367 for LSU, but in the end, it did not matter. BJ Ojulari led the LSU defense with 11 tackles, including 1.5 for loss. LSU’s Jarrick Bernard-Converse had the game’s lone interception.

With Saturday’s win, LSU now controls its own destiny in the SEC West. The final two SEC games for the Tigers are trips to Arkansas and Texas A&M.

Entering Saturday, LSU had not defeated Alabama in Baton Rouge since 2010. It was Alabama’s first overtime loss since falling to LSU in Tuscaloosa in 2011 by a 9-6 score. Prior to Saturday, Alabama had not lost to a program with a first-year head coach since falling to Gus Malzahn and Auburn in the memorable 2013 regular season finale.

With the loss, Alabama falls to 7-2 and 4-2 in SEC play. The Crimson Tide will try to keep their conference title hopes alive on Saturday at No. 11 Ole Miss at 3:30 p.m. ET on CBS.

That trip to Fayetteville awaits LSU on Saturday. The Tigers and Arkansas will kick off at 12 p.m. ET on ESPN.