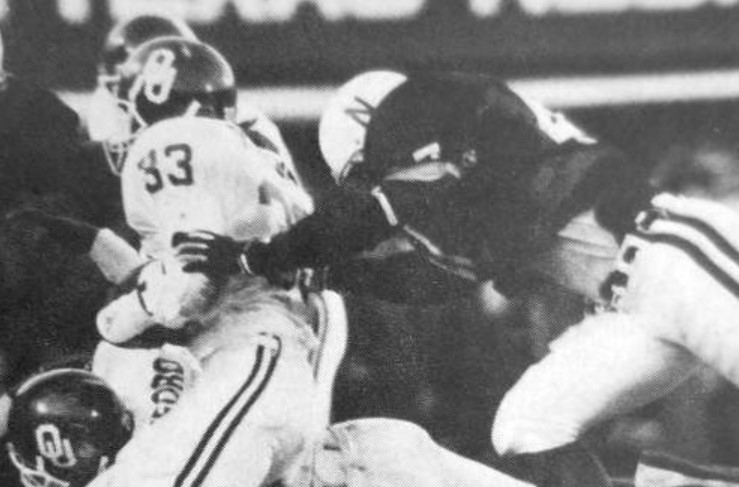 Matchups between No. 1 and No. 2 during the regular season can be rare. When it comes to Nebraska and Oklahoma, however, that’s hardly the case.

The 1971 contest is the most famous of those, but one with less drama took place on this day 35 years ago. The second-ranked Sooners came into Lincoln and stifled the No. 1 Cornhuskers, 17-7.

Nebraska had just overtaken Oklahoma in the AP Poll as it arrived at Memorial Stadium on Nov. 21, 1987. At 9-0, the Cornhuskers were coming off a bye week.

By eking out a 17-13 win over Missouri, Oklahoma had fallen to No. 2. At 10-0, the Sooners were looking to complete a perfect regular season and win the Big 8 outright.

Sooners Swarm in Second Half

Nebraska entered as a 4-point favorite and managed to take a 7-0 lead to the locker room. Keith Jones’ 25-yard touchdown run late in the first quarter served as the only score of the first half.

It would be one of the few Nebraska offensive highlights of the day.

Oklahoma outgained Nebraska in yardage 444-235, but it wasn’t until the third quarter that the Sooners got on the scoreboard. Anthony Stafford’s 11-yard touchdown tied the game early in the third quarter. On a day where Oklahoma rushed for 419 yards, Patrick Collins’ 65-yard rumble for a touchdown later in the period served as the game’s biggest play as the Sooners went ahead for good, 14-7.

The victory for Oklahoma may have been more convincing had it not been for eight fumbles and three lost. Defensively, Oklahoma intercepted Nebraska quarterback Steve Taylor three times. Rickey Dixon recorded two.

Nebraska closed the regular season with a 24-7 win over Colorado, but fell to Florida State in a thrilling Fiesta Bowl, 31-28. With a 10-2 record, the Cornhuskers finished No. 6 in the final polls.

Oklahoma retook the top spot in the polls, but in another No. 1 vs. No. 2 matchup, it fell to Miami 20-14 in the Orange Bowl for the national championship. The Sooners finished third in the polls behind Miami and Florida State.

While Oklahoma was unable to claim its second national title in three years and fourth under head coach Barry Switzer, it did claim the Big 8 title outright. It clinched that with a win in Lincoln. That win came on this day 35 years ago.