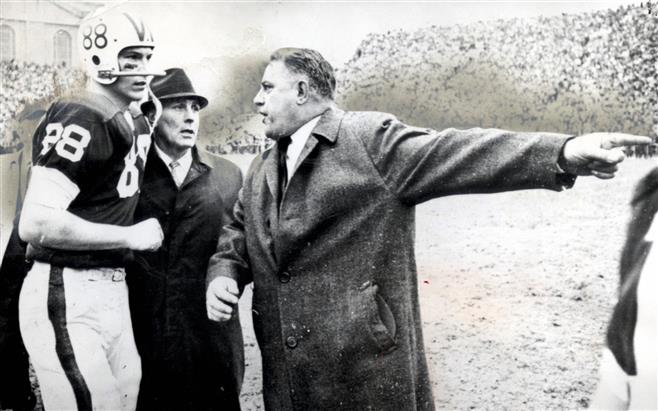 Each year, Wisconsin and Minnesota battle for Paul Bunyon’s Axe. The most significant meeting between the schools, however, may have come on this day 60 years ago.

In a matchup of top-5 teams, Wisconsin rallied with a late but controversial touchdown to stun Minnesota, 14-9.

Leading 9-7 late in the game, it appeared that Minnesota had sealed the victory when Minnesota’s Jack Perkovich intercepted Wisconsin quarterback Ron VanderKelen in Minnesota territory. Following the throw, however, the Golden Gophers were assessed a roughing the pass penalty, which not only kept the Badgers alive but moved the ball to the Minnesota 28-yard-line.

Before the next snap, Minnesota was assessed another 15-yard penalty for unsportsmanlike conduct. With the ball inside the 15, Wisconsin rode fullback Ralph Kurek to the game-winning touchdown and the Big Ten title.

It would be 31 years later before Wisconsin clinched another trip to Pasadena. Milt Bruhn’s team got the job done with a thrilling but controversial win that came on this day six decades ago.

A Look Back on Top-5 ACC Matchups