Stark Vegas: More Than a Brand, It’s a Way Of Life 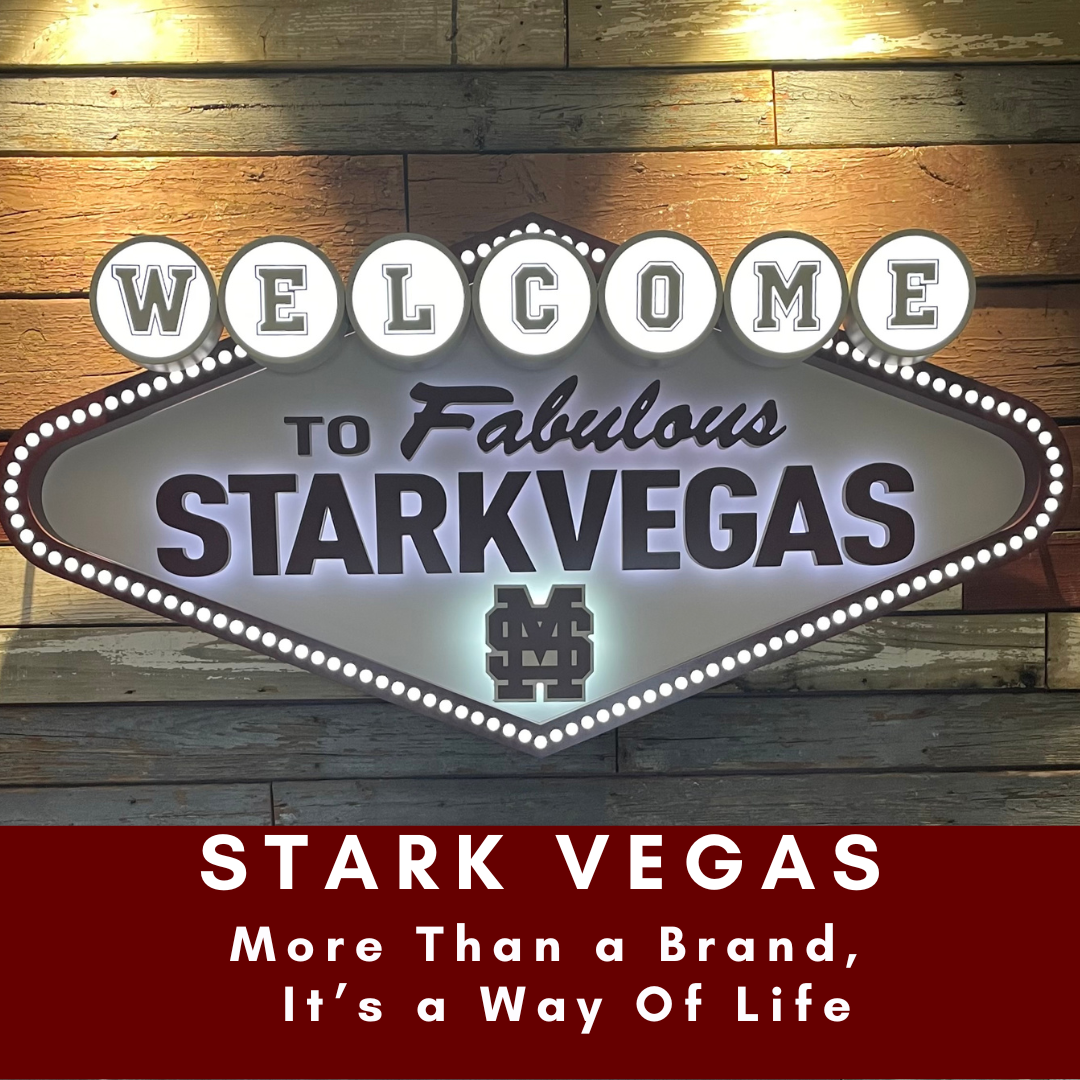 Welcome to Fabulous Stark Vegas! You see the sign and bright lights throughout Starkville, Mississippi, and on the campus of Mississippi State University. What is it though? Was it just another catchy marketing or recruiting saying or branding? The SEC is home to some of the most iconic brands, Death Valley in Baton Rouge, The Swamp in Gainesville, and The Vol Navy in Knoxville. I wanted to find out for myself.

I traveled to Starkville to see Mississippi State take on the Georgia Bulldogs on November 12th. I wanted it to be more than a road trip to see an SEC football game at one of the iconic stadiums and atmospheres in college football: Davis Wade Stadium. Home of the Cowbell.

More (than a) Cowbell

An “ear-splitting slice of hell for the visiting team,” that is how Sports Illustrated’s Pat Forde described the Cowbell at Mississippi State. The Cowbell is an iconic piece of Mississippi State history. It was a fantastic site to see Bulldog fans young and old carrying and clanging their cowbells at the tailgates and inside the stadium on Saturday night. A fan next time had a cowbell from his girlfriend’s father, who rang when he was a student in Starkville. I’m sure there are many stories like that.

Stark Vegas wasn’t always embraced by the university and Mississippi State fans. The nickname emerged about 25 or 30 years ago, according to an article published in the New York Times.

“The term began regionally as a casual insult to describe a town perceived as a backwater. The joke was that Starkville, home of cowbell-clanging fans, was not exactly Las Vegas. As an administrator at Kentucky and Baylor, (Scott) Stricklin remembered, he would hear people sigh and say something to the effect of, “Our team’s got to go to Stark Vegas this week.”

That all changed in 2009 when the university partnered with Adidas. Adidas visited the town and seized on the opportunity to take what was once held as a stigma and turn it into one of the most iconic brands in college football and athletics.

Adidas has become to Mississippi State, what Nike is to the University of Oregon. Adidas outfits all the university’s athletic teams in its branded content.

One of the highlights of this partnership is the life-size Adidas shoe box at the Leo Seal Football Complex. The life-size shoe box has a 360° camera inside for Mississippi State recruits to show off.

This summer, to celebrate the 50th year of Title IX, Adidas signed 15 female student-athletes to name, image, and likeness (NIL) deals. Junior goalkeeper Maddy Anderson from Mississippi State was one of the recipients.

Here’s the complete list of collegiate athletes who are a part of @adidas NIL again in case you missed it:

Commitment to the Student-Athlete

Our first stop on the tour was the Templeton Athletic Academic Center. The center is the home to many of Mississippi State’s student-athletes. The 34,000-square-foot facility features 34 tutor rooms, 8 private study rooms, 1 large study area, 2 computer labs, and a state-of-the-art dining facility. Adidas helped plan the grand entrance for student-athletes and visitors. In the center of the atrium, is the iconic Welcome to Fabulous Stark Vegas sign and Adidas uniformed mannequins line both sides of the entryway.

The Center is not only there to honor and celebrate Mississippi State student-athletes, but also provides student-athletes with academic support and a first-class nutritional center. The menu at both the Templeton Center and the Leo Seal Football facility is tailored to the student-athletes. MSU Executive Senior Associate Athletic Director and CFO Eric George told Joel Coleman the facilities will represent a game changer for Bulldog student-athletes.

“This project will allow us to take the next step in providing our student-athletes the very best experience possible at Mississippi State as they receive the fuel they need to perform at their absolute peak. These new areas give our athletes a space that is exclusively their own where they can eat and bond with their teammates and fellow student-athletes from other sports. It will help foster the family feel that we already have here, while at the same time, give each individual the nutrition he or she needs to be at their best when it’s time to compete.”

The facility does a brilliant job of celebrating and representing Mississippi State football. The walls tell the story of the Egg Bowl, Mississippi State’s in-state rival with Ole Miss. The facility also highlights those players from the Magnolia State that have stayed home and have played for the Maroon and White. This Is Our State keeps track of those players from Mississippi that have been drafted. The Sip To State wall tracks those home-grown Bulldogs that have won Super Bowls, were First Round Picks or were drafted to the NFL.

One of the coolest graphics is the From State to Sunday series. The walls not only have pictures of all the current Bulldogs in the NFL, but it also has a real-time ticker that shows the contract value for each Mississippi State player in the NFL.

The gameday atmosphere at Davis Wade Stadium is second to none. The stadium seats just over 61,000 people and were rocking on the Saturday night before the two teams squared off. It was a cooler day with temperatures in the mid-30s. A near-sellout crowd brought their cowbells and the energy on a great night for SEC football. Before the game, Allie took me on a tour of the various amenities available to Bulldog fans.

The stadium offers various upgraded spaces from traditional seats. These spaces feature all-inclusive buffets and beverage stations, their own private store, multiple high-definition televisions, and individual lockers that can be stocked with the owner’s beverages of choice. Allie shared with me that Davis Wade offers every type of fan a unique experience on gameday. In addition to large suites, the university also has clubs to provide fans with a unique Stark Vegas experience on game day.

The Gridiron club offers a unique “on-field” experience in the North End Zone. Located below the student section. The club offers indoor and outdoor seating for fans to watch the game.

The State Level Loge seats are divided into four-, six- or eight-seat sections. In addition to the buffet and beverage stations, the Loge provides small groups to gather in the North end zone to watch the game. Each Loge comes with a small flat-panel television.

One of the most impressive parts of my athletic tour was the opportunity to explore their baseball facilities. Mississippi State is home to one of the top baseball teams in the SEC. The Bulldogs have won 11 SEC Championships and won its first-ever National Championship in 2021.

The Bulldogs play at Dudy Noble Field. That stadium currently holds the record for an NCAA on-campus single-game attendance record at 15,586. The field is home to the iconic “Left Field Lounge.” Named the #1 place to watch college baseball, fans will bring their grills and cook hamburgers and hot dogs for their family, friends, and sometimes for the rival team’s left fielder.

In 2019, Mississippi State opened up the Left Field Lofts. Each loft offers 2 bedrooms, 2 bathrooms, a kitchen, living space, and a patio deck.

No idea who shot this but holy crap. Video from the Left Field Lofts at the #NewDude pic.twitter.com/2AdsiSksf2

Currently, the lofts require boosters and fans to rent the space for a full 12-month lease. At the top of The Lofts is The Rooftops. The Rooftops are a great open-air space open to any of the leaders to watch the game and catch a glimpse at the expansive athletic grounds at Mississippi State. Similar to the football stadium, there is a buffet upon request and each resident has their own personal locker furnished with the beverages of their choice.

The final stop on my tour was Mississippi State’s basketball facility “The Hump.” Unlike Football and Baseball which have both been upgraded in the last few years, The Hump is in the middle of a massive makeover. The $50 million dollar renovation project is set to be completed next year and when finished will cosmetically improve the exterior of the building, create a walkway between The Hump and Dudy Noble Field, and create a 5600 square foot club area.

One of the most impressive features of The Hump’s layout is the layout of the men’s and women’s basketball facilities. Both program offices and practice facilities are located in the arena. This to me represents a game changer for the women’s basketball program and shows the importance of women’s athletics in Stark Vegas.

The Stark Vegas name started as an insult to Mississippi State University. They have transformed the name and the Student-Athlete experience to make all of Stark Vegas proud.