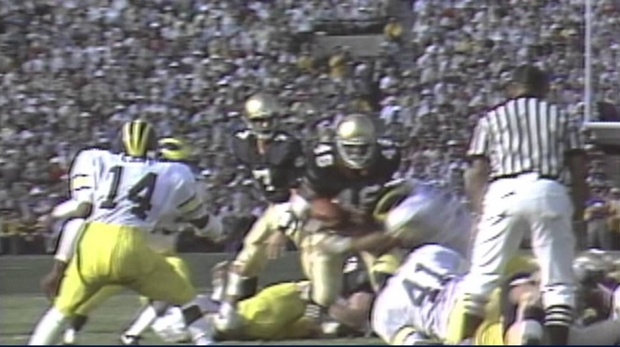 As Notre Dame head coach, Lou Holtz went 6-2-1 against Michigan. Of those nine contests, seven were decided by seven points or less.

Holtz made his Notre Dame debut on this day 35 years ago, but it was Michigan who left as victors. A missed field goal in the final seconds helped the Wolverines hold on for a thrilling 24-23 victory.

Michigan had finished 10-1-1 in 1985 and ranked No. 2 in the country. The Wolverines began the 1986 season ranked third in the preseason AP Poll and received six first-place votes.

As the clock ticked under two minutes, Notre Dame looked hopeless. A pass interference call on third down had given Michigan a new set of downs and the Fighting Irish were down to just two timeouts.

On first down inside the Notre Dame 30-yard-line, Michigan running back Bob Perryman carried the ball up the middle where he was leveled by Notre Dame’s Mike Griffin. The ball came loose and Wes Pritchett recovered to give Notre Dame the ball back with just 1:33 remaining.

Starting at his own 26-yard-line, Notre Dame quarterback Steve Beuerlein connected on throws to Alvin Miller for 33 yards and to Milt Jackson for 16 to move the Fighting Irish inside the Michigan 30. Notre Dame would advance just one yard further over the next three plays as the contest came down to a field goal attempt.

After connecting from 25 yards out earlier in the quarter, kicker John Carney came on to try the go-ahead 45-yard field goal. Carney’s attempt had plenty of leg, but sailed well left with 13 seconds remaining. Michigan took a pair of kneel-downs to run out the clock and escape.

Tied 7-7 after a quarter, Notre Dame regained the lead midway through the second quarter on a short touchdown run by Mark Green. Pat Moons kicked a short field goal with less than a minute to play in the first half for Michigan to cut the lead to 14-10 at halftime.

Michigan took its first lead about six minutes into the second half when Morris found the end zone from a yard away. After recovering the ensuing kickoff, the Wolverines were in the end zone again six seconds later when quarterback Jim Harbaugh hooked up with Morris for a 27-yard scoring strike.

With more than three minutes to play in the third, Notre Dame scored the game’s final touchdown on a 3-yard toss from Beuerlein to Joel Williams. Carney missed the ensuing extra point, which would ultimately prove costly. Carney’s 25-yard field goal with 4:26 remaining in the contest cut the lead to 24-23 and capped the scoring.

Beuerlein finished with 263 yards passing in the loss while his counterpart, Harbaugh, tossed for 239 yards. Morris led Michigan with 108 yards from scrimmage while scoring all three of the Wolverines’ touchdowns.

Michigan started the year 9-0 and ascended to No. 2 in the AP Poll before falling to Minnesota. The Wolverines would go on to win the Big Ten for the first time in four years, but fell to Arizona State in the Rose Bowl, 22-19.

Notre Dame would go on to finish 5-6 in 1986. That served as the only losing season for the Fighting Irish in 11 years under Holtz. It started with a heartbreaking loss to a rival on a missed field goal 35 years ago today.

Column: Finding Hope in the Heartbreak for FSU