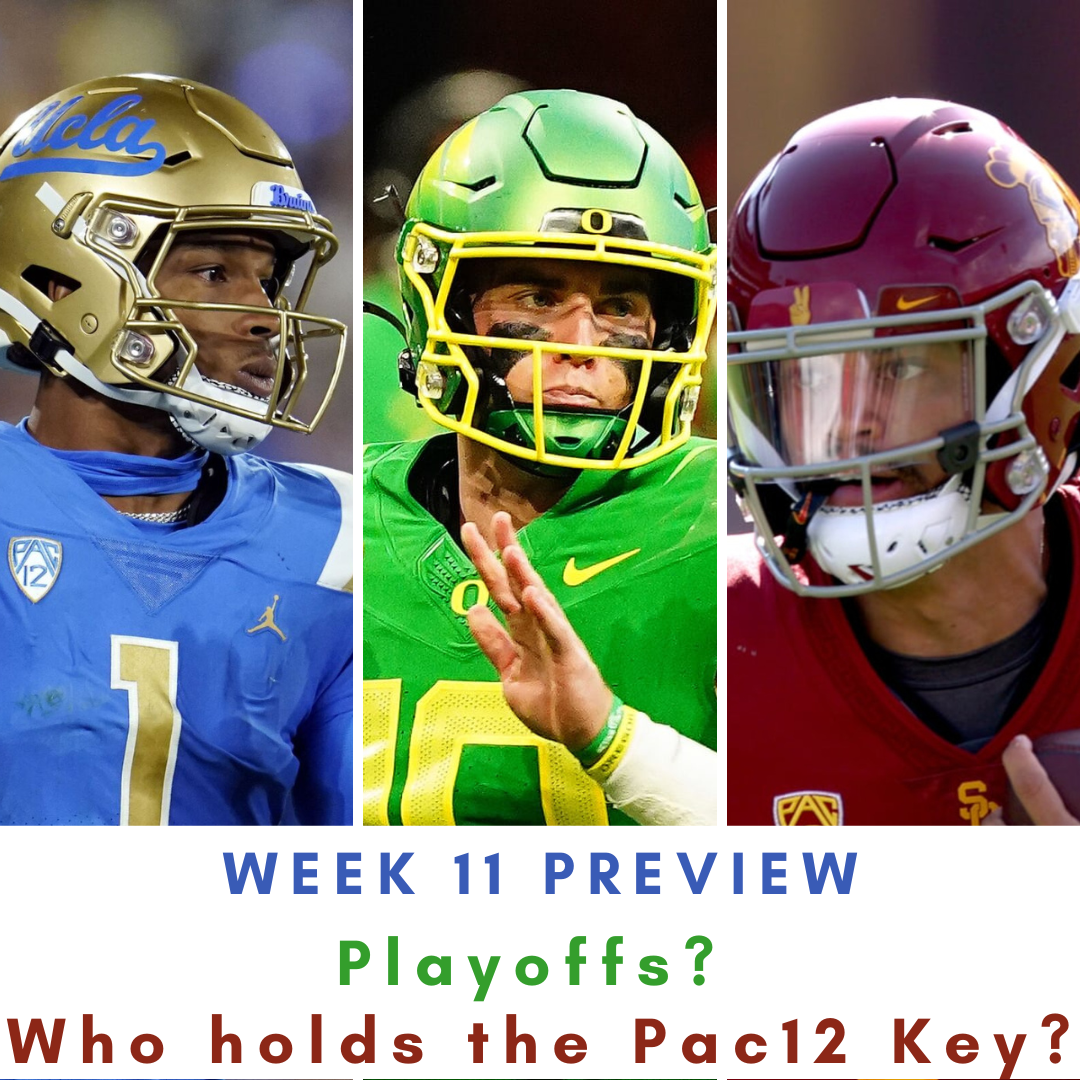 The candle still burns on the Pac-12’s hopes of securing one of the four spots in the College Football Playoff (CFP). In most years, the Pac-12 is an afterthought when it comes to the selection committee. The ACC has taken up that banner this year.

Oregon, USC, and UCLA all have an opportunity over the next four weeks to make a move and find their way into the playoff. Each team is ranked in the top 12 and has an opportunity to win the Pac-12 Championship.

Take a look at the full #CFBPlayoff selection committee rankings for games played through November 5.

Where does your team rank?

The Pac-12 has the second-most teams, five, in the CFP rankings this week outside of the SEC, which had six. We’ll take a closer look at the three teams and see who has the best shot at making the playoff. We’ll look at their College Football Playoff ranking, remaining schedule, and any potential roadblocks.

The best thing each of the three teams has going for it is that the Pac-12 has done away with North and South divisions. Instead, it will have the top two teams in the league play for the championship at Allegiant Stadium in Las Vegas on Dec. 2. Going with the top teams in the conference provides each team a chance for a signature win and a meaningful 13th data point for the committee during the final selection process.

The Ducks sit at 8–1 and are the highest-ranked Pac-12 team in the committee’s rankings. Dan Lanning and the Ducks have picked themselves up off the carpet after getting trounced by Georgia in Atlanta in Week 1. Oregon is led by Heisman Trophy hopeful and Auburn transfer Bo Nix.

Nix has used his arm and legs to lead a high-flying offense. Nix was a three-year starter at Auburn. He would show flashes of brilliance only to let a play or two turn the tide. Nix has thrived in Kenny Dillingham’s offense, throwing for almost 2,500 yards, 22 touchdowns, and only five interceptions.

The Ducks have a tough stretch of games to finish the season. They benefit from having to face both Washington (this week) and Utah (next week) at home. The Ducks will then travel to Corvallis to play a much-improved Oregon State team under Jonathan Smith.

The Ducks will then have to face either USC or UCLA in the championship game. Oregon defeated UCLA earlier this season 45–30 at Autzen Stadium.

The Week 1 loss to Georgia is the biggest obstacle that could keep Oregon and the Pac-12 on the outside looking in — even if it wins the rest of its games.

One has to look back to 2018 Ohio State for an example. The Buckeyes were routed 49–20 at Purdue. The loss kept both Ohio State and the Big Ten out of the playoff.

🎟 Washington 🆚 Oregon (-12.5)
📍 Autzen Stadium
⏰ 7 p.m. ET
📺 FOX
💰#GoDucks
Two transfer quarterbacks face off in Eugene. Unlike Lanning, Michael Pennix Jr. and Nix have found the grass to be greener elsewhere. Pennix has thrown for more than 3,200 yards, and 23 touchdown this season — and not just against Michigan State. Nix has thrown for almost 2,500 yards and 22 scores.

🎟 Texas A&M 🆚 Auburn (-1.5)
📍 Jordan-Hare Stadium
⏰ 7:30 p.m. ET
📺 ABC
💰 #WDE
Auburn interim head coach Cadillac Williams probably isn’t going to get the job, but man, does he love his university. He coaches with emotion and his players have responded. Williams and the Tigers give Jordan-Hare something to go crazy about and end the Aggies’ bowl hopes.

What to Know About Each Bowl Game...