5-Year CFB Anniversary: Tennessee Rallies from 21 Down to Snap 11-Game Skid to Florida 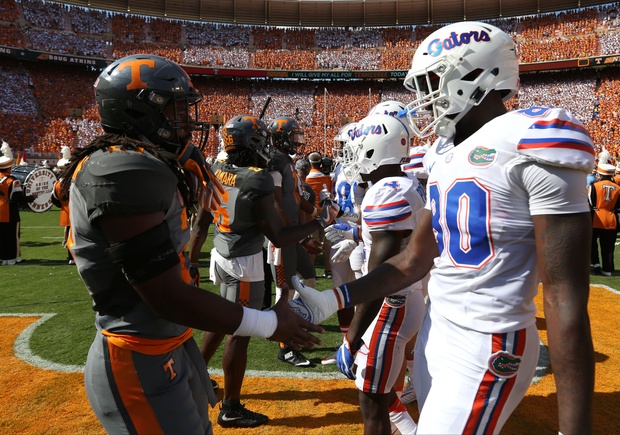 To say that the rivalry between Florida and Tennessee has been lopsided over the last two decades would be an understatement.

As the teams get set to do battle on Saturday, Florida has won 15 of the last 16 in the series. The exception came on this day five years ago as the Volunteers dug out of an 21-point hole for an unbelievable 38-28 victory.

Both teams were 3-0 and ranked in the top 20 as they arrived at Neyland Stadium on Sept. 24, 2016. The Volunteers were ranked No. 14 after relatively hard-fought wins over Appalachian State, Virginia Tech and Ohio.

The Gators arrived as winners of 11 straight in the series. Ranked 19th, Florida had cruised through its early schedule with wins over Massachusetts, Kentucky and North Texas by a combined 99-14 margin. For a half, it looked like the trend of easy victories would continue.

For 27 minutes, nothing had went right for Tennessee. The Volunteers had turned the ball over twice and had two drives inside the Florida 10-yard-line result in no points.

Behind Austin Appleby touchdown passes to DeAndre Goolsby and Jordan Cronkrite followed by a Jordan Scarlett touchdown run, Florida led 21-0 as the first half wound down. After having two drives stall in the red zone, Tennessee settled for an Aaron Medley field goal late in the first half following another stalled drive.

Few would have guessed at the time that it would begin a stretch of 38 straight points.

With the score now 21-17, the fourth quarter was just more than two minutes old when the Volunteers went ahead for good. Dobbs’ 67-yard touchdown strike to Jauan Jennings put Tennessee on top, but there was still 12:45 to play.

The next Florida possession lasted just one snap. After Todd Kelly Jr.’s interception of Appleby set the Volunteers up in Florida territory, it took just three plays to reach the end zone. Dobbs’ fourth touchdown pass of the day — a 42-yard connection with Josh Malone — pushed the lead to 31-21.

Following Florida’s fifth 3-and-out in six possessions, Dobbs put the final nail in the Gators’ coffin. On a 50-yard march that consisted of four runs — three by Dobbs — the Tennessee quarterback capped the drive with a 5-yard rushing touchdown. It was his fifth total score on a day where he finished with 319 yards passing and 80 more on the ground.

Florida would finally end the onslaught of Tennessee points with Appleby’s third touchdown pass of the day. His 10-yard toss to Freddie Swain with 4:17 remaining was a case of too little, too late.

Although Dobbs was the star of the show, Appleby did finish with 296 yards passing in the loss. Hurd led all rushers with 95 yards in the victory. Florida’s Antonio Callaway (four catches, 134 yards) and Jennings for Tennessee (three catches, 111 yards) each had big receiving days.

The victory at the time seemingly put Tennessee in the driver’s seat in the SEC East. After another big win over Georgia a week later however, the Volunteers dropped four of their final seven regular-season games. They were forced to settle for a 38-24 win over Nebraska in the Music City Bowl to end the season.

Florida would lose just once more in SEC play and win the East division. The Gators however, were handled by Florida State and Alabama in the SEC Championship before closing the year with an Outback Bowl victory over Iowa.

Both teams finished with a record of 9-4. Florida won the SEC East while Tennessee won bragging rights over its rivals for the first time in more than a decade. It did so with a memorable comeback that took place on this day five years ago.