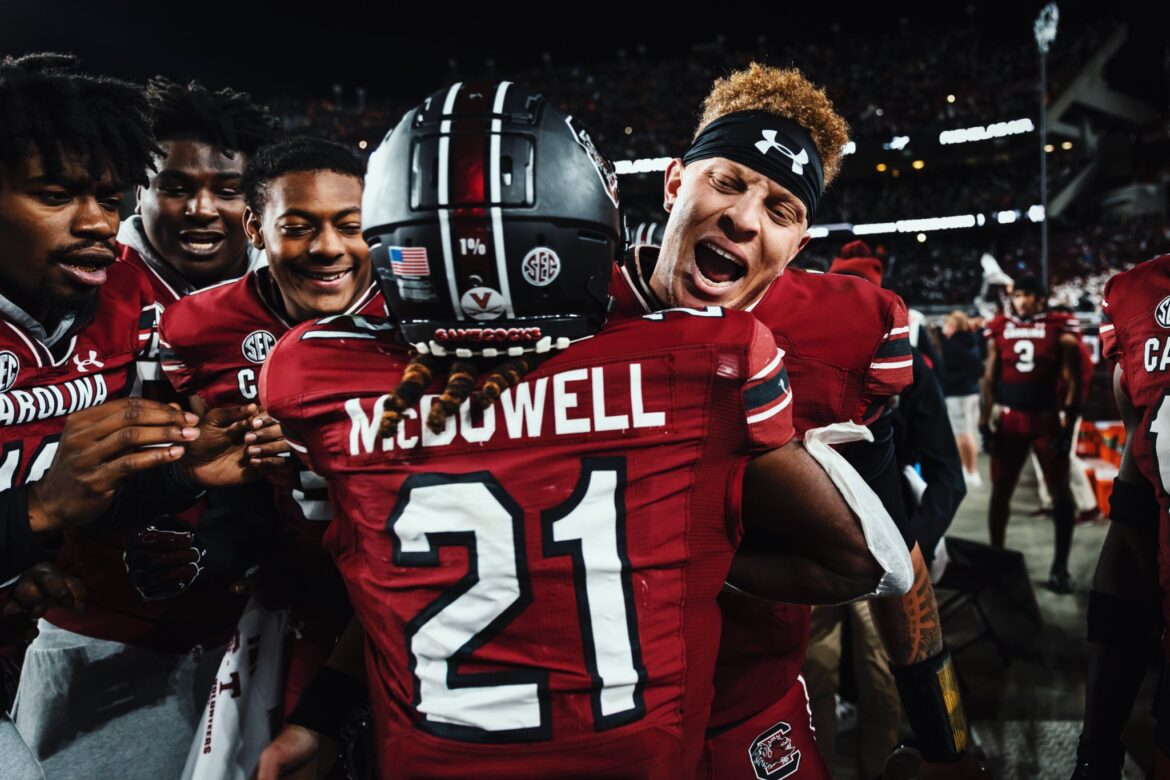 Since the inception of the College Football Playoff in 2014, the SEC has been no stranger to getting multiple teams in the playoff. That again seems like a possibility in 2022, but one team’s hopes fell by the wayside on Saturday.

In Columbia, S.C. on Saturday night, a title contender was knocked out. South Carolina dominated from the start in a 63-38 rout of No. 5 Tennessee.

With their stunning 25-point beatdown of the Volunteers, the Gamecocks have earned this week’s distinction of Fifth Quarter/CFBHome Team of the Week:

Domination from the Start

Entering Week 12, Tennessee quarterback Hendon Hooker was seen as a Heisman Trophy contender. There was a time, however, when the same thing was said about South Carolina quarterback Spencer Rattler.

A transfer from Oklahoma, Rattler was once viewed as the next great quarterback in Lincoln Riley’s system. On Saturday night, it was Rattler — and not Hooker — who looked like one of the nation’s best.

Rattler finished 30-for-37 passing with 438 yards and six touchdowns in the win. As a team, South Carolina finished with more than 600 yards of offense.

The Gamecocks led by as many as 18 points in the first half before Tennessee cut the deficit to 35-31 early in the third period. South Carolina responded with four straight touchdowns to put the contest away.

To add insult to injury, Hooker left the game with a season-ending knee injury. Despite the drubbing, the Tennessee signal caller played well, finishing with 247 yards passing and three touchdowns in the loss.

The South Carolina defense didn’t exactly put on a clinic, but it did hold Tennessee to its second-lowest scoring total in SEC play. DQ Smith and Marcellas Dial each finished with nine tackles in the win. Tonka Hemingway had the lone sack for the Gamecocks.

Entering Saturday’s contest, South Carolina had been held to less than 300 yards of total offense in three of its previous four games before erupting for 606 yards. Rattler’s 438 yards passing and Wells’ 177 yards receiving were both career-highs.

The 63 points allowed by Tennessee was the most in an SEC game ever. That previous high was 62, allowed by Steve Spurrier’s Florida team in 1995. That is also the last time that South Carolina scored more points in an SEC contest than it scored on Saturday.

For South Carolina, the victory was its seventh all-time over a top-5 team and first since a 20-17 overtime win over Georgia in 2019.

The loss of Hooker serves as a devastating blow as Tennessee looks to bounce back and collect its first 10-win season since 2007. Now 9-2 for the year, the Volunteers will try to do that on Saturday when they visit rival Vanderbilt.

At 7-4, South Carolina will also take on an in-state rival as it tries to snap a 7-game losing streak to Clemson. That road contest for the Gamecocks will kick off Saturday at noon ET on ABC.