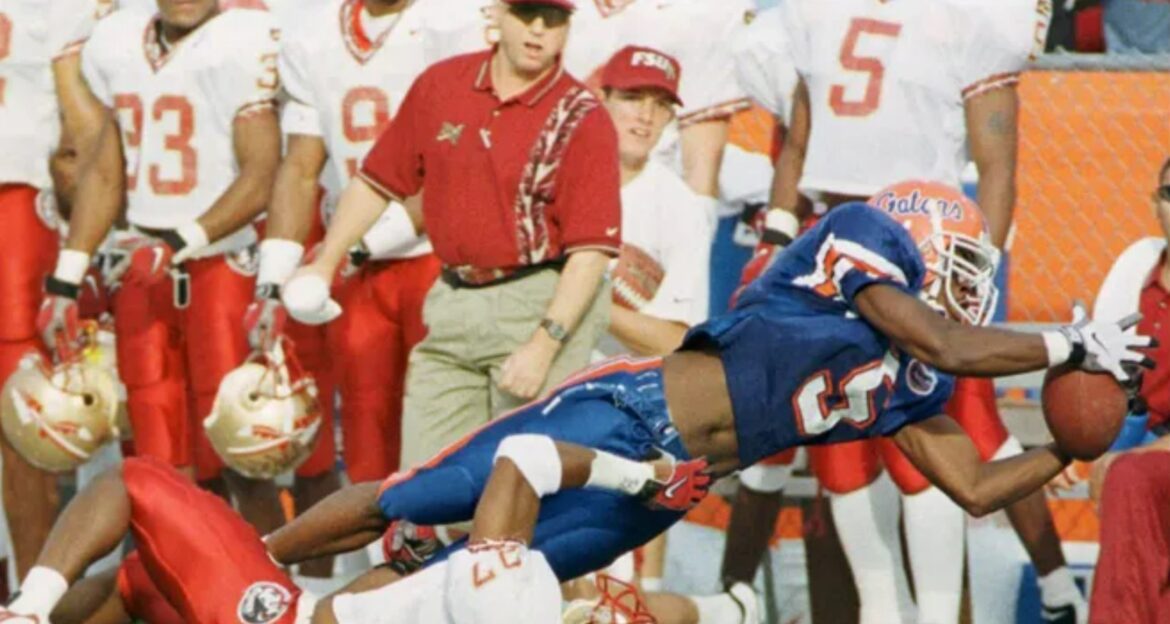 From 1990 to 2000, Florida and Florida State met 13 times. Led by legendary coaches in Steve Spurrier and Bobby Bowden, both teams were ranked in the top 10 for each meeting.

More often than not, the contests lived up to the hype. Surprisingly, however, the game-winning score came in the final two minutes just once. It happened on this day 25 years ago.

Fred Taylor finished with 162 yards rushing and four touchdowns, including the game-winner as Florida upset Florida State in Gainesville, 32-29.

At 10-0, FSU was ranked No. 2 in the AP Poll and No. 1 in the Coaches Poll as it arrived at Ben Hill Griffin Stadium on Nov. 22, 1997. To that point in the season, the Seminoles had already knocked off four ranked opponents.

At 8-2 and ranked No. 10, Florida was in the midst of what some considered a down year by its lofty standards. The Gators saved their best performance for their most bitter rivals.

FSU led 17-6 early on, but the contest would feature seven lead changes. While Taylor stole the show, Florida State running back Travis Minor was up to the challenge, rushing for 142 yards and a touchdown of his own.

After starting the decisive drive on hiw own 20-yard-line, Florida’s Doug Johnson found Jacquez Green for a gain of 63 yards into the red zone. Taylor did the rest with rushes of 16 yards and then one to put Florida back in front with 1:50 left, 32-29.

On the ensuing FSU possession, linebacker Dwayne Thomas sealed the win with an interception of FSU quarterback Thad Busby. Against one of the nation’s best defenses, Florida finished with nearly 500 yards of offense. Green led all receivers with seven catches for 145 yards.

Both teams would finish the season strong against Big Ten competition. Taylor finished the season and his career with another outstanding effort in a 21-6 Citrus Bowl win over Penn State. The Gators finished 10-2 and No. 4 in the AP Poll.

FSU bounced back with a 31-14 win over Ohio State in the Sugar Bowl to finish 11-1 and No. 3 behind co-national champions Nebraska and Michigan. The loss to Florida, however, may have cost FSU its second national championship in five years. It came on this day a quarter-century ago.