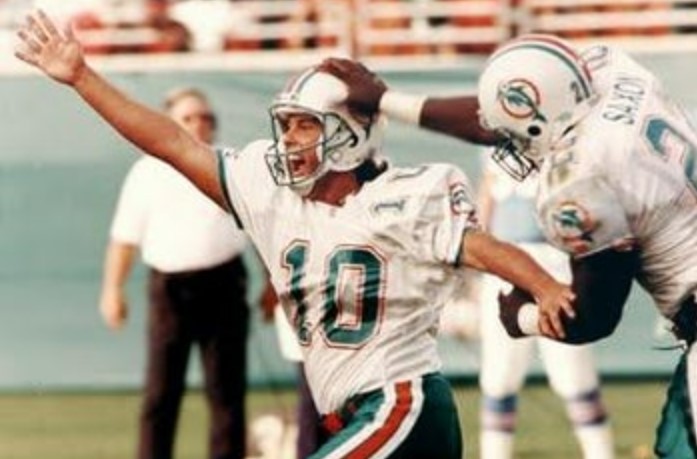 For the Miami Dolphins, the 1992 season was full of close games and thrilling finishes. More often than not, the Dolphins found a way to win.

That was the case on this day 30 years ago. Pete Stoyanovich’s 52-yard field goal with two seconds left lifted Miami to a 19-16 win over the Houston Oilers.

Without starting quarterback Warren Moon, the Oilers were also desperate for a win. After a 4-1 start, Houston had lost three of five.

Until the game’s final snap, the Dolphins never led. Houston raced to a 10-0, but the Dolphins twice drew even.

Stoyanovich was the reason both times. His 29-yard field goal early in the fourth quarter had knotted the game at 16, but with less than two minutes to go, Houston’s Al Del Greco had a chance to put the Oilers back in front.

With 1:54 to go, however, Del Greco missed from 41 yards out. On a day where he completed fewer than half of his passes, Miami quarterback Dan Marino completed six straight throws to move the Dolphins to the Houston 35-yard-line.

3-for-3 on field goals to that point, Stoyanovich’s fourth attempt split the uprights with plenty of leg to spare. What was once a 10-point deficit had become a Miami victory.

Marino passed for 237 yards and a touchdown pass to Fred Banks, who led the Dolphins with 85 yards receiving. Haywood Jeffries scored Houston’s lone touchdown on a toss from Cody Carlson.

Houston would lose just once more during what would be a 10-6 regular season. The Dolphins finished 11-5 and as AFC East champions.

Both teams’ seasons, however, would end at the hand of the Buffalo Bills. Buffalo throttled Miami in the AFC Championship, 29-10. Before that, however, the Bills made an epic comeback from 35-3 down to beat Houston in the AFC Wild Card game in overtime, 41-38.

The loss to Buffalo would be the Oilers’ second 3-point loss of the season. The first came courtesy of a 52-yard Stoyanovich field goal on this day three decades ago.